The video was provided by youtube user twobarbreak (Peter Loggins).  Mr. Loggins (if I have the correct Mr. Loggins, and am not conflating two similar people) is a swing dancer, teacher, and a researcher of jazz age dances.  He has a blog that you can visit here.  Mr. Loggins has added music to this silent clip.  It is “King Chanticleer”.

Mr. Loggins states in the comment section that while he doesn’t know the genesis of the original recording, he was able to obtain this particular clip after it was donated to a San Francisco television archive by a private individual who has since passed away.  Someone in the comments suggests that it might be part of a lost Sol Lessor and Hal Mohr film shot in San Francisco around 1913-1914 called “Last Night at the Barbary Coast.”  There is no way to verify this.

The cover photo (which really has very little to do with this post) is an 1851 Daguerrotype of the San Francisco Barbary Coast, provided by Wikimedia Commons.  It is in the public domain. 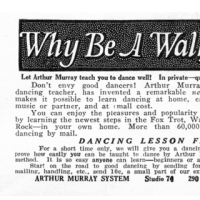