Anna Pavlowa (also known as Anna Pavlova, or Anna Pavlovna) was a Russian prima ballerina during the late 19th and early 20th century.  She famously created the role of The Dying Swan, and, according to Wikipedia, is credited as the first ballerina to tour ballet around the world.

Ms. Pavlowa’s dance expertise appears to extend beyond the realm of ballet.  In 1913, Ms. Pavlowa created, or at least sanctioned, a number of articles for the El Paso Herald on the issue of social dance.  The sequence was called “The New Social Dances.”  The El Paso Herald describes the situation thusly:

“This is one of a series of articles especially written for the El Paso Herald by Mlle. Anna Pavlowa, the greatest living premiere danseuse, who has posed with her dancing partner, Lawrenti Novikoff, for each figure.  The dances to be explained and illustrated are those now in vogue in society ballrooms.”

In the article below, Ms. Pavlowa describes Lesson 1 of the Gavotte – “Pointing and Posing”:

Ms. Pavlowa states that she is teaching the Russian Gavotte, which she claims is a favorite in Russian ballrooms.  She provides several solo photographs demonstrating Gavotte poses, pointing out that no partner is needed for illustration as both gentleman and lady face each other while striking the same poses on the same feet.  The key, it seems, is to execute the upper body movement while taking care not to disturb the foot placement.

Ms. Pavlowa’s hopes for a popular Gavotte revival appear to have been unfulfilled.  Vernon Castle, writing roughly a year later, noted that while Ms. Pavlowa was responsible for the reintroduction of the Gavotte to modern audiences, it had yet to catch on in most ballrooms as it had not been, in his opinion, “sufficiently modernized.” (Washington Times, February 8, 1915, p. 8) 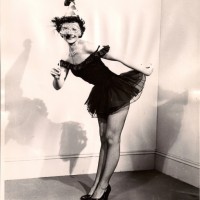